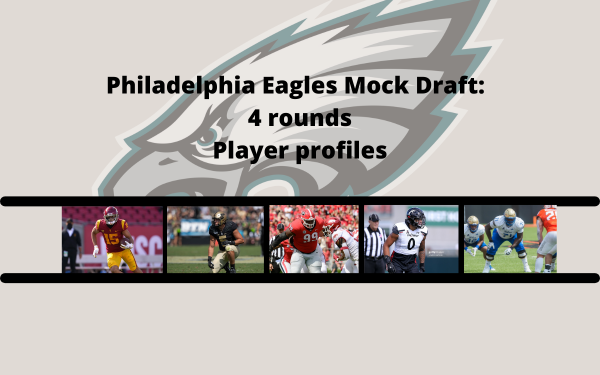 Similar to last draft, PHI will be wise to take yet another WR in the first round. London will be a great compliment to D. Smith, a more polished and quick route runner whereas London has tremendous positioning and hands to secure big time plays.

London also competed on the USC basketball during his time there, which has translated to the confidence and ability to make those big time plays. I have even noticed it seems like it’s helped his navigation in traffic and reading defenders. Whoever is the QB for the next few years will greatly appreciate having this guy to throw to in crunch time or panic situations.

Davis tested unlike anything we’ve ever seen before at his weight of 341 pounds. Adding him to the defense, for 15 plays a game or 45 plays a game, will immediately pay dividends.

He has incredible strength and burst to fill gaps and pursue ball carriers. There may be a lack of college production, but then again five or six of his defensive teammates will be taken in the first round of this years draft as well, so there were a lot of mouths to feed.

With the third and final pick in the first round, PHI should opt to further improve that defensive line group by adding another physical and strong defender, this time along the edge in Karlaftis.

While not as flashy as others in this class, Karlaftis provides a high upside at not only a position of need but also a premium position in this years draft class. Getting to the QB is getting more and more important, so taking two pocket collapsers and run lane fillers will lift the PHI defense into a formidable defensive unit.

If you ask around the league – you can never have too many interior offensive linemen. With the focus likely on the rushing attack and giving J. Hurts as much time as possible to read defenses, it makes sense to draft an aggressive and developmental prospect with tackle experience and a guard outlook.

I think working with the PHI offensive line group and playing within that style of offensive can allow Smith to stabilize a role for himself throughout his rookie year.

Beavers is an incredibly smart person, posting a 4.0 GPA in high school and has shown toughness and improvement throughout his college career. Sticking with the physical and aggressive theme throughout this draft; Beavers plays downhill well and absolutely loves the game of football and getting better at it. A pick that any team should be happy for, PHI grabs him to become a crucial part of a potential dynamic rookie defensive core.